Choosing a Word for the Year 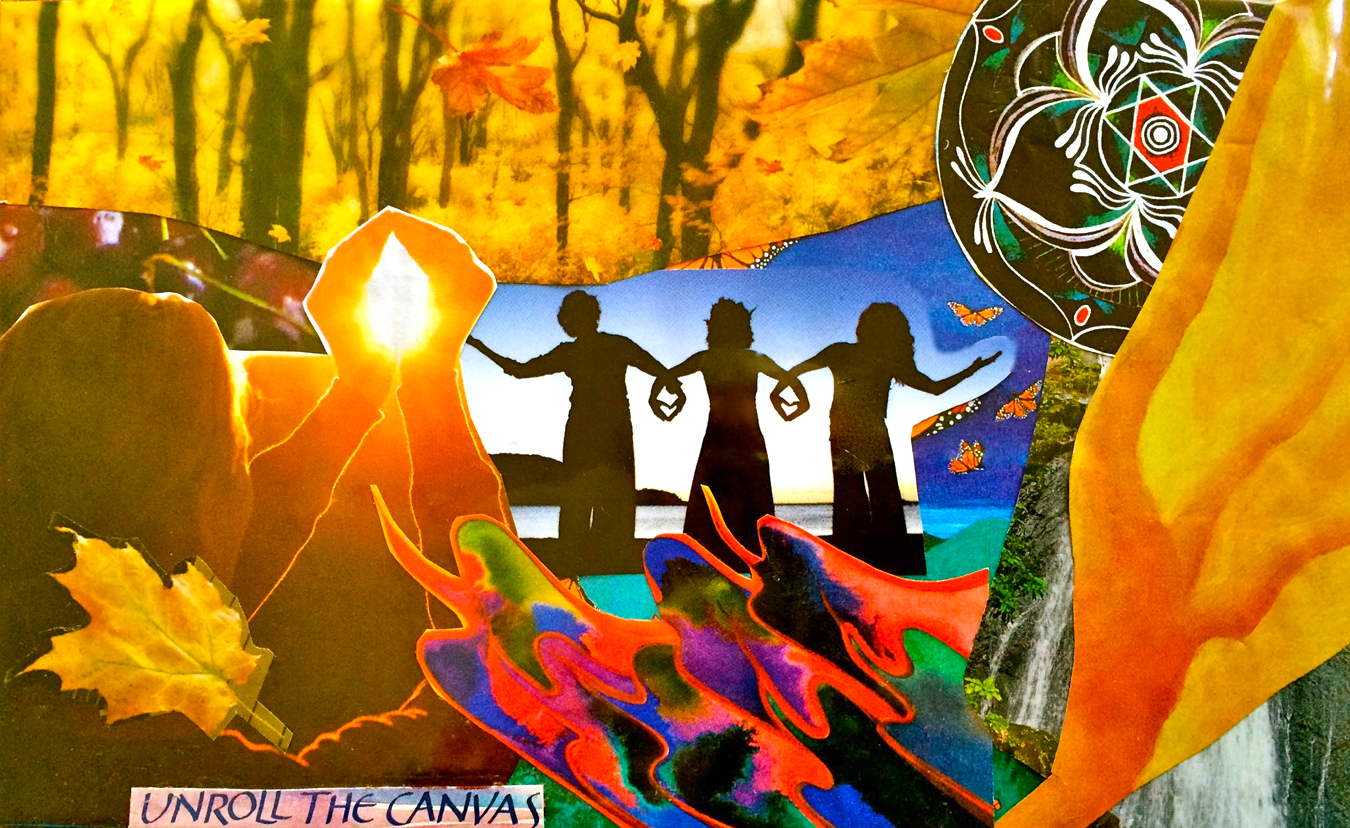 Last year about this time three KRMC friends and I chose words for the year and created vision boards to help us live into the words.  Deanna, Nancy, Lindy, and I met one Tuesday morning to begin the process of identifying and clipping magazine photos before arranging them into collages to depict our words.

I'm not typically a ‘word-of-the-year’ sort of person, but ‘unfolding’ found me like this:

In early January of 2015 I read a story explaining that Canadian Mennonites had decided to give congregations the option to choose whether or not they would become open and welcoming in their individual settings.  In response to a friend’s question, I replied that I had given up expecting Mennonite Church USA to make a similar response and was instead waiting for an ‘unfolding.’  Even as I wrote the word, I recognized it as my word for the year.

A month later, as I was preparing for a conversation with my spiritual director, I journaled that the word ‘unfolding’ was giving me the “freedom to consider options, to go with the flow, that it had become a lens for viewing my alternatives.”  Living with the word ‘unfolding’ for 12 months gave me permission to slow down, to pause, to consider, to mull over incidents, opportunities, decisions, joys, and sorrows that came my way in 2015.

When I look at the collage now, a year after creating it, I see lots of golden light, I see freedom, ways of unfolding that must have been subliminally there but as yet unspoken when the vision board came into being.  And that’s the thing about creating space using a discipline like a word for the year…it allows you to find something for which you didn’t know you were looking.  It offers room for life to ‘unfold’ at its own pace. 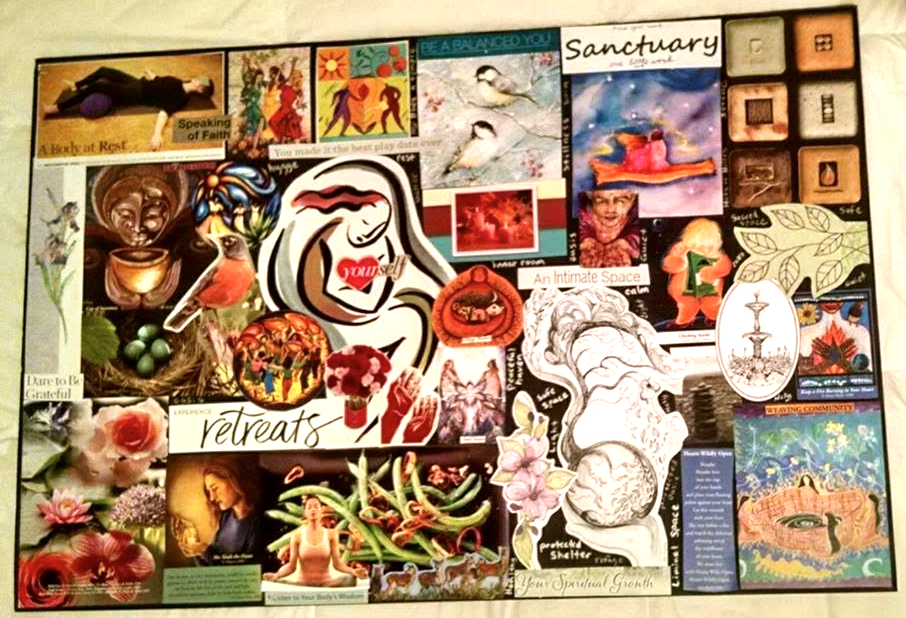 Deanna has embraced the discipline of choosing a word for the year for some time.  “Sometimes the word chooses me.  I gradually lived into the word ‘balance’ in 2014, as I worked on creating Balance Resource Cards.  The word ‘balance’ appeared everywhere, even in my dreams.  It became my focus in all aspects of my life….I felt balanced in 2014.”

She has discovered that a theme or intention aids focus at the front end of goal-setting. “Choosing a word for the year helps me decide when to say ‘yes’ and ‘no’ to the many opportunities that compete for my time and attention. I appreciate having my guiding word as a vision for the year.”

Nine months into finding the word ‘sanctuary’ for 2015, Deanna wrote this:  “I am creating sanctuary this year in my home and wooded property, so that it is a safe, warm, loving refuge for my work, my relationships, and my inner life. I am also treating my body as a sanctuary for the Divine, which impacts how I care for myself. Sanctuary has been a transformational word for me this year.” 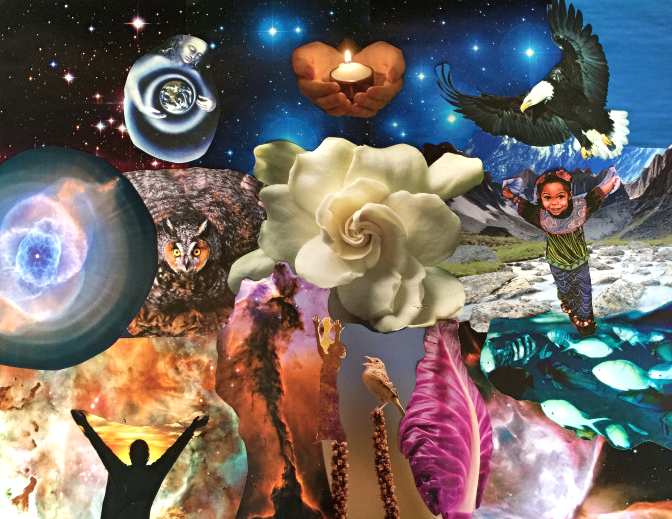 Nancy noticed that ‘joy,’ her word for the year in 2015, “settled on me in a roundabout way that let me know it was not entirely my choice.  Joy has begun to work on me in quiet ways, waking me each morning to the good things that lie ahead, showing me the moment-by-moment choice I have between gratitude and worry.”

As she was piecing together her magazine photo montage, Nancy writes in a blog post from last March, “The meaning emerged. Joy is the heartbeat of the Universe echoed in all things and all souls, and joy is participating in that, dancing to it, unfolding and blooming to it, swimming in it.”

Nancy found herself “especially pleased with a trio of images that came together in the lower center, under the gardenia, right to left: a plain little singing bird; a woman with her arms raised in praise or supplication with a third, shadow arm between them (suggesting Divine participation in this); and the actual picture of a solar flare that, positioned in this way, looks like a woman. These images seem particularly harmonious and define, better than words, the joy to which I aspire this year.”

The early arrival in March of her second grandchild prompted this recognition about her word for the year:  “Now and then Joy comes together full blast and sweeps you into its vortex, like the swirling gardenia and the sweeping wings of the eagle. The ordinary, everyday, absolutely miraculous birth of a child into your family is this kind of Joy.”

Lindy’s word for 2015 was ‘creation.’  “I liked the duality of the word as it was speaking to me in two areas I felt the need to enhance and focus on in 2015—my experiences and growth in God as our Creator and his creation, as well as my personal artistic journey where I hoped to take my own process of creation to a new level.”  (In the depiction above, the personal board appears on the left and the God board on the right.)

Lindy recalls a yearning “to be committed to focusing on this word with expectations that I will learn and grow throughout the year.”  Her year did, indeed, take unexpected twists and turns as her mother suffered health issues that led to Lindy’s offering care and often taking her away from home.  “During this time, my word was certainly with me, especially as I spent five weeks going through long days of rehab with my mother.  My two-hour daily drive became a respite, and I began taking my camera to capture the beautiful sunsets and cloud formations which I felt were God’s little paintings, created in the sky just to comfort me.”

Lindy’s mother’s stroke left her with both physical and mental challenges.  Rehab offered tools from five therapists and acted as the stage for ‘creation’ of a new normal for her mom and the family, according to Lindy.  “Time and patience became our friends.   Working closely with the therapists and neurologists as they explained what the damage was and how the brain can sometimes re-learn certain things was both fascinating and amazing.  God’s creation, in the human body, was being revealed to me in a way I would have rather avoided, but allowed me to see life, the ultimate creation, with a new appreciation from a deeper perspective.”

Lindy’s word ‘creation’ “also impacted me personally as I worked to create a healing, safe, helpful environment for my mother to continue her journey at home.  Both my mother's strength and my own were tested time and time again as this health crisis created a new dimension within our mother-daughter relationship.”

Sometimes resolutions and goals set at the start of a new year leave those who craft them feeling defeated within a month or two.  My friends and I discovered that our words for the year continued to be life-giving 12 months in.  My experience was so fruitful, in fact, that I’m considering keeping my word for a second year.

Have you experimented with choosing a word for the year to help clarify your vision for 2016?