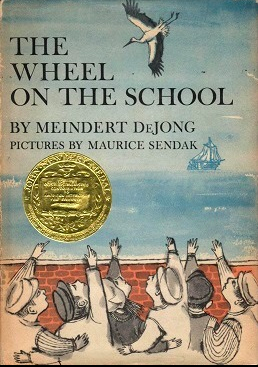 One of my earliest memories of learning about The Netherlands and its inhabitants dates back to my childhood acquaintance with Meindert DeJong’s 1955 Newbury Prize-winning book, The Wheel on the School.  I had forgotten that Maurice Sendak, whose Where the Wild Things Are I have since read many times to children and grandchildren, illustrated the book that I found so appealing in my childhood.

I loved the story of Lina, one of six school children in the small fishing village of Shora. Wikipedia says this about the book:  “When Lina writes an essay for school asking why there are no storks in their village, the teacher encourages the class to find out for themselves. They discover that the roofs on the village's homes are pitched so steeply that the storks cannot find space to nest on the sharp ridges.”  The children discover that “placing a wagon wheel on each roof ridge would give storks a place to nest. The task of finding a wagon wheel in the tiny village proves difficult, and the children meet several interesting personalities during their search.” 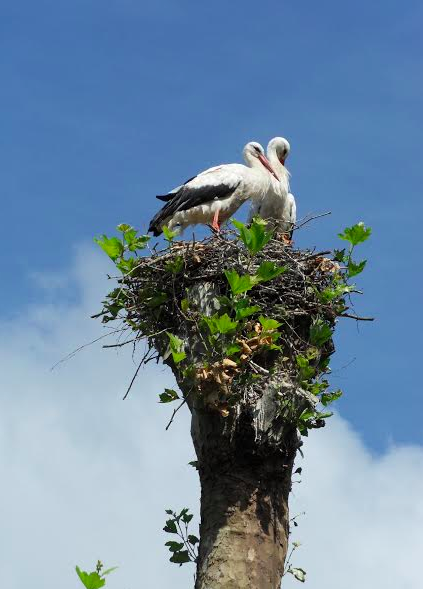 I hadn’t given the book much thought in years, until it came to mind this week as a Friesian friend showed us around her hometown of Beetsterzwaag, driving us by several storks’ nests, though the occupants were not on the premises when we visited.  (See her photo above.)

Our regular jaunts to The Netherlands started in 1981, when we began accompanying Jim’s econ students on European trips every other summer.  The excursions included six weeks on campus in the Dutch province of Friesland, where we spent long, leisurely days (the sun never disappeared until 10:30 at night and returned by 4 in the morning), with cows (including one our three-year-old Megan named Burnt Marshmallow) and sheep grazing contentedly in nearby fields, and back-way bike rides between small villages beckoning regularly.  We learned about hazelnoot and sprinkles, frites, and stroopwafels in a time when no one gave a thought to where the next act of terrorism might occur. 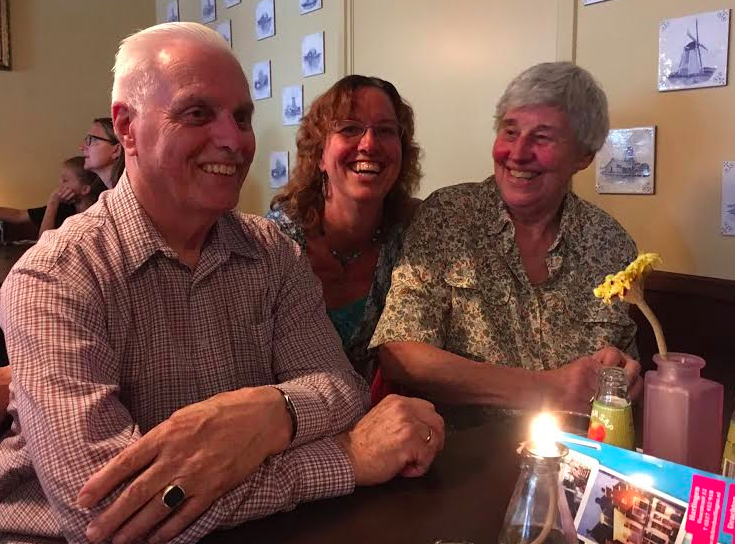 On our first trip we met Hester, a young teen at the time, and her parents at the Mennonite church in Drachten.  She was eager to practice her English skills with our students, who were a few years older than she was, and came often to visit us on campus.  She ultimately spent six months with my folks in eastern PA as a Mennonite Central Committee trainee in 1985-86.

Our family has known the kindness of Dutch folks many times over through Hester and her family, and we discovered that kindness to be for real again on this trip as a gentleman, who observed us struggling with directions on the street, offered, “Perhaps I can help you?” while we deliberated about which way to turn to find a vegan bakery we discovered on the internet.

The second day, a passing pedestrian volunteered assistance with finding our way as we walked to the Rijks Museum.  That evening as daughter-in-law Susan and I took a tram across town to a restaurant serving a vegan rice table, we asked another commuter waiting with us when the tramlines shut down for the night.  He kindly told us and offered alternate bus routes if we stayed out past midnight.  When we got off at the Dam, as he did, he flagged us down and offered his list of bus numbers that would get us home if need be.

These three interactions with kind strangers, the day of and after the slaughter in Nice, France, remind me that lots of good things continue to happen in our world on the micro level.  How often does word of the good news, which may seem all too insignificant, reach the world at large?

How might we be more intentional about mindfully sharing these stories of pleasant surprises that come to pass in our lives, in spite of the fact that much currently seems wrong with the world in which we live?  Consider a time when you have been assisted by a stranger when you needed help…a time when you have offered help to a stranger in need.  And if not a stranger, then when have you reached out to the neighbor in need, the friend in need?  When have you been part of bringing glimpses of healing and hope to another?  When has another offered you healing and hope?  I have found it useful to remind myself frequently of the many ways I see the Divine through the acts of others.

Even after all these years of exposure, I love the Dutch accent and detect it easily wherever I go; I love the red roof tiles visible from the air as one descends over Amsterdam.  I love the thatched roofs still in existence in Friesland, and the Rijks and Van Gogh Museums remain favorites no matter where I go.  Vincent has been an artist I have appreciated for a very long time.  His production of artwork that has survived the test of time in spite of the daily struggles he endured is an inspiration.

On yet another visit this last week to the art museum named for him, I learned that following one of his hospitalizations he said he “felt like a broken pitcher that could never be mended.”  Even after emotional illness had taken its toll, he noted that “painting and drawing gave structure to his days and ensured that he did not fall prey to the loneliness plaguing other patients” in the asylum to which he had himself committed.

Could it be that loving The Wheel on the School all those years ago is where the warm spot in my heart for The Netherlands and its people took root?  That the journey started for me as a pre-teen when I read a Newbury award-winning book?  A journey that not only took me to The Netherlands many times over the years and toward a deep appreciation of Van Gogh and his paintings, but one that also brought me a son-in-law of Dutch heritage and found my own son involved in teaching at a Christian Reformed school with Dutch roots?

It's been fun to recognize more of these links and connections as they unfold on this trip; what's unfolding for you?