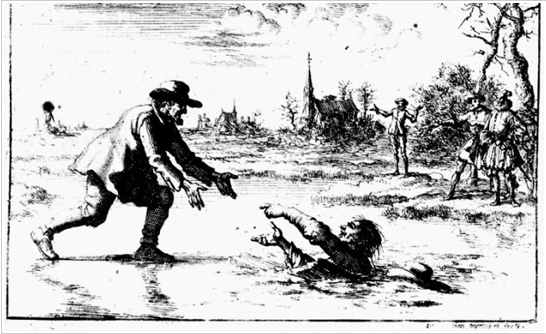 Local, regional, and worldwide Mennonite representatives participated Saturday at Century Center in South Bend during the closing worship service of the Indiana-Kentucky Synod of the Evangelical Lutheran Church in America as that body took steps to extend the hand of fellowship to area Anabaptists.

Just prior to closing worship, an unrehearsed choir including eight Kern Road representatives along with approximately 20 more persons from seven other Goshen/Elkhart area congregations sang unaccompanied four-part harmony hymns as their contribution to a meeting of the 500-delegate session explaining the background of the Lutheran-Mennonite dialogue which dates back to 1980.

A timeline on the Lutheran World Federation’s (LWF) website points out several milestones in the recent dialogue history:  in 2008 the LWF Council agreed to explore whether Lutherans might apologize for their ancestors’ actions against Anabaptists during reformation times, followed in 2010 by LWF’s 11th assembly in Stuttgart asking Mennonites for forgiveness and committing itself to look at ways of implementing a reconciliation process.

Healing Memories:  Reconciling in Christ, published in 2010 by The Lutheran World Federation and Mennonite World Conference (MWC), reported that, at the MWC assembly in Paraguay in July 2009, LWF general secretary Ishmael Noko, who grew up in present-day Zimbabwe as the child of an Anabaptist mother, “received an emotional standing ovation as he described Lutheran sorrow and regret at their history and their intention to seek forgiveness:  ‘We take these steps as we Lutherans are approaching a milestone anniversary; in 2017, we will observe 500 years of Reformation. It is important we bring to this observance not only celebration of the fresh insights into the gospel which arose from this movement but also a spirit of honesty and repentance, a commitment to the continuing reformation of our tradition and of the whole Church. It is in this spirit that we hope to move forward on this issue of the heritage of our condemnations.’”

Larry Miller, then MWC general secretary, “also received warm thanks and a standing ovation in October 2009, as the Lutheran World Federation Council voted unanimously to recommend that the 2010 assembly ask forgiveness ‘of God and of our Mennonite brothers and sisters’ for the wrongs of the persecution and its legacies ‘up until the present day.’”

Miller said, “We receive your commitment to rightly remember this shared history, and your vulnerability in taking steps to heal the fractured body of Christ in which we live together, as a gift from God.  We are aware of the difficulty of the task. We are dealing with holy histories, yours and ours. We are dealing with our most basic self-understandings, yours and ours. For you, the witness of the Augsburg Confession is foundational and authoritative, an essential shaper of your identity. For us, the witness of the Anabaptist martyrs is a living and vital story, retold in our global community of churches to build group identity.”

Miller’s comments also included these questions to the Lutherans and to the Mennonites:  “How can you distance yourself from the condemnations and their consequences while still honoring your history and strengthening your identity? How can we distance ourselves from use of the martyr tradition which perpetuates a sense of victimization and marginalization—and your reaching out for forgiveness pushes us to do precisely that—how can we thus distance ourselves while still honoring our history and strengthening our identity?”

As she shared some of this history with the delegate session Saturday, Kathryn Johnson, named director in 2015 of Ecumenical and Inter-Religious Relations for the denomination, referenced the 16th century Dirk Willems story (illustration posted above) in which Dutch Anabaptist Willems rescued his pursuer from falling through melting ice.  Having been imprisoned for his religious stance, Willems escaped but was rearrested after pulling the guard to safety.  He was burned at the stake four days later.  Lutherans had forgotten their role in that sort of religious persecution, Johnson said, until talks between them and Mennonites began.

Kraybill presented a basin and towel to Bishop William Gafkjen of the ELCA, and Stoner, who indicated that “Mennonites are deeply moved by the seriousness with which Lutherans took this action,” confessed that “we have been tempted to tell the best of our story and the worst of yours.  We are sorry for that."

He continued, “We have asked Mennonite educators to examine the stories they tell about Lutherans.  This exercise, this work can and is changing us, both Lutherans and Mennonites, freeing us to be more of who God intends us to be.  We cling to our martyr stories; we have sometimes told them as that’s what they did to us, rather than as this is what it means to follow Jesus.  We remain wounded if we don’t do the hard work of healing.”

Observing that “the story of trauma still runs deep in our veins," Stoner said, "The unhealed trauma still keeps us bound in ways we don’t understand.  We want to let this new reality shape us, free us, unbind us” as we walk into a new chapter in our relationship with Lutherans.