In the adult literacy teacher–training workshop the week after Easter in Mbuji Mayi, DR Congo, was an eccentric woman. Marie-Claire didn’t seem to care much about her appearance. Her hair went every which way. Her clothes were a bit grubby. She peered over wire-rimmed glasses. She crossed her legs. One day she showed up in a baseball cap. 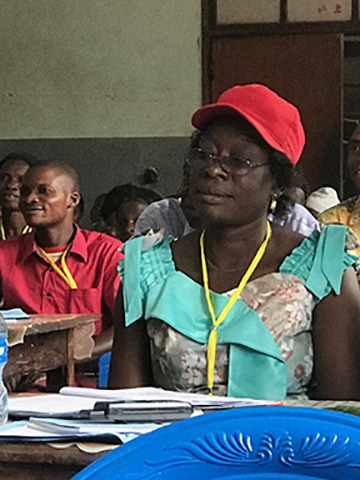 Marie-Claire also had a terrible, honking cough that punctuated even the rafter-raising hymn-singing that charged up the energy at the beginning of each day.

Perhaps I was the only one to be bothered by Marie-Claire’s cough. On the first day, the woman who was provincial head of one of the two Mennonite groups represented in this training nominated Marie-Claire for the position of Village Chief, a sort of ombudsman for the training. Marie-Claire was a member of the other, and often rival, group. When she was elected by a large majority she kissed her nominator almost on the lips. I cringed but the other woman did not.

Marie-Claire took her position seriously and often came forward to whisper something to my friend Hélène José sitting next to me who was hosting the training. I tried to keep my distance but was not always successful. I was horrified when she coughed into her hand and then picked up a crying baby. By the end of the week my throat was tightening up a bit and I started chewing Airborne tablets to ward off any viruses that Marie-Claire might have spread around.

Marie-Claire was also among the most enthusiastic of the 60 would-be teachers. That is saying a lot because the energy in the class was high. She was not the most gifted but she was unafraid of making mistakes and kept trying to get the method right.

In fact, Marie-Claire had already started a literacy class six weeks earlier. Hélène José, who was trained a year ago, had introduced her to the method and given her some books and Mare-Claire had rounded up students. She brought half a dozen of them to class one day. But she knew she needed more training and she was thrilled to be getting it.

I heard of other teachers who had been trained in previous workshops and were training assistants on their own. One teacher who was trained last year in Kinshasa, a young man named Justice, not only teaches three separate literacy classes in the Bondeko church building, KRMC’s sister congregation, but also hopes to train other teachers in all five Mennonite congregations in the Massina district. When he can find the time. 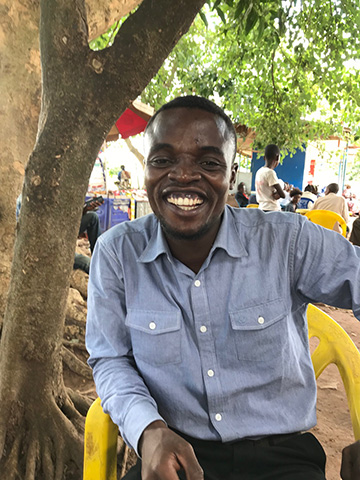 Teaching people to read in Congo is an idea whose time has more than come. The harvest is ripe and the reapers are few. In modern parlance, the idea is going viral— as viral as Marie-Claire’s cough.

In his morning homilies, the Mbuji Mayi workshop chaplain compared Congo’s illiteracy problem to the dry bones in Ezekiel’s vision. He said the people learning to read would be like the blind man in John 9: they wouldn’t care why they had been helped, or who their teachers were; they would only rejoice in their newfound wholeness. 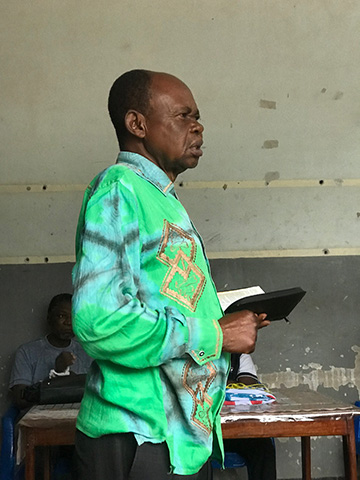 The joy of new readers is contagious, as those working in Kinshasa and Kikwit who have started teaching in the last year testify. They say the students bring their friends to class. Their enthusiasm and success, in turn, reward the teachers; the energy flows on.

Another day the chaplain referred directly to the viral nature of the good news in Paul’s second letter to Timothy, chapter 2: “The things you have heard me say in the presence of many witnesses entrust to reliable people who will also be qualified to teach others.” He encouraged the new teachers not only to find learners but also to develop other teachers. And indeed, this is happening.

I did come home with a cough. I don’t know if I caught it from Marie-Claire but if so, it was worth it. I feel privileged to participate in the good news of this project.

What ignites your joy? What good news is spreading among us?

Nancy Myers, a KRMC member, is overseeing the Congo Literacy Project as a volunteer on behalf of Africa Inter Mennonite Mission, a partnership with the women of Congo’s three Anabaptist denominations. For more about this project see Nancy’s blog at www.thepracticalmystic.org.