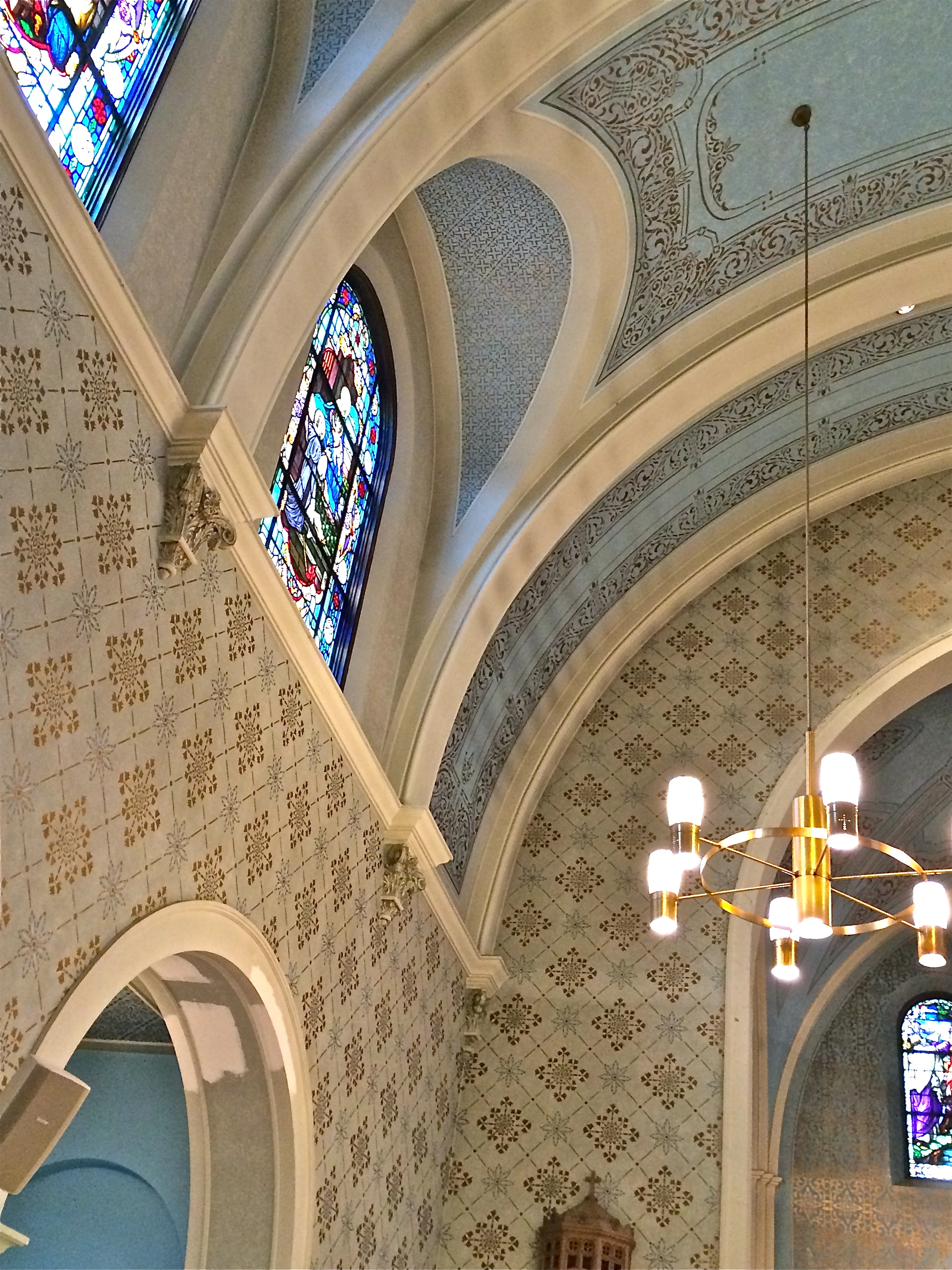 Soaring with music to the dizzying heights of St. Monica’s vaulted ceilings

A good friend from Kern Road offered to take me to Vesper Chorale’s performance of Brahms’ Requiem, perceiving that it might play a role in my navigating the grief journey of losing a parent.

The chorale, which rehearses at Kern Road Mennonite Church, is conducted by KRMCer Wishart, and for this past weekend’s concert included Kern Road singers Mary, Brenda, Vic, and Nevin, among other personal friends and acquaintances from the surrounding area.  I had no trouble imagining losing myself in this performance, to be staged in the beautiful St. Monica Catholic Church, Mishawaka. For this opening concert of the chorale’s 25th anniversary season, KRMCer Murray played tympani, and many others who identify with the congregation were among appreciative listeners.

Having sung the requiem twice more than 20 years ago, I was already acquainted with the music’s soaring, surging power and both the English and German words, but I became particularly attracted to the possibility of basking in the piece as part of the journey of loss after reading Rhonda Miska’s post, Grieving with Brahms’ Requiem, at the U.S. Catholic website in preparation for the concert.

“After a death we often struggle to integrate the reality that our loved one is gone and yet somehow mysteriously not totally gone. I had been with my grandmother when the veil was thin, during her final hours when it felt as though my role was to be a midwife for her departure from this world. After being at that precipice, in that intensely powerful space between life and death, being back in the world of making hotel reservations for the funeral, organizing photographs for the wake, and tracking down the email addresses of second cousins was disorienting,” Miska wrote.

Following her grandmother’s death, she said, “I craved a lodestar to orient myself amid the waves of grief, a channel for my prayers I couldn’t begin to put into words. I wondered how to do this—for my grandmother, for my family, for God, for myself. Beyond the many practical logistics that come with a death in the family, how was I to chart the way?....I found an answer to my questions and to my wordless prayers in 19th-century composer Johannes Brahms’ Ein deutsches Requiem (A German Requiem)—a great work of art that became a trusted roadmap as I traversed the grief at the passing of our family matriarch.”

According to conductor Wishart’s program notes, “No one is quite certain why Brahms undertook to compose a requiem in his own language to a libretto that he assembled himself from Luther’s translation of scripture.  His sorrow over the death of his mother in 1865 as well as his continuing grief over Schumann’s untimely death nine years earlier certainly impacted this decision.”

And, the conductor continued, “Uncertainty also surrounds his motivation for the theme and choice of lyrics.  Why quote so much scripture when his belief system no longer supported it?  We know from his comments that he hoped to write a requiem for the living—to imbue the music with comfort for the sorrowing.” Unlike a typical mass for the dead in Catholic liturgy, this requiem offers consolation to the mourners, in the words of author James R. Oestreich in a New York Times article posted in May 2017: “Rather than dwelling on the judgment of the deceased, (Brahms) seemed intent on consoling those left behind.” Oestreich adds that the piece “has become something of an anthem for our time, with grand social and political reverberations” about which you can read more at this link.

I enjoyed learning more about the requiem at this Harrisburg Symphony Blog post, which includes details about each movement (and a no-longer-available recording of a performance of the requiem at the Vienna Musikverein). In his introduction to the work prior to its performance, conductor Wishart suggested that one way to experience the music might be “to close your eyes and let the music wash over you. The more often you hear it, the more meaningful the music becomes,” he added, noting that youtube.com features many renditions.

“What good art can do for us is offer a container for universal human experiences—like grief—which are at once common and deeply personal. While the many tiny particularities of our departed loved ones—the precise way he laughed, the specific way she brewed her coffee or folded the laundry—are what we most remember and miss, the grief journey is common and fundamental to our existence. Artists like Brahms extend an enduring hand across space and time to accompany us and offer the consolation that while our particular loss is unique, the human experience of grief is shared,” Miska concluded in her article on grieving with the requiem.

In Singing, A Mennonite Voice, authors Marlene Kropf and Kenneth Nafziger propose the theory that “music gives us (Mennonites) a faith with flesh and blood and breath and ushers us into realms of glory and grace.” They are speaking of congregational singing when they say, “We will know that the Lord is still our Shepherd because our songs will set the truth quivering in our bodies, minds, and souls.  Singing will bring us into the presence of the Shepherd who leads into green pastures and beside still waters to the eternal feast of God’s presence.” For a similar reason, I suggest listening to “Brahms bursting in air” (quote from the conductor’s introductory comments) offers solace to the grieving soul.