Recognizing the Creator in trees 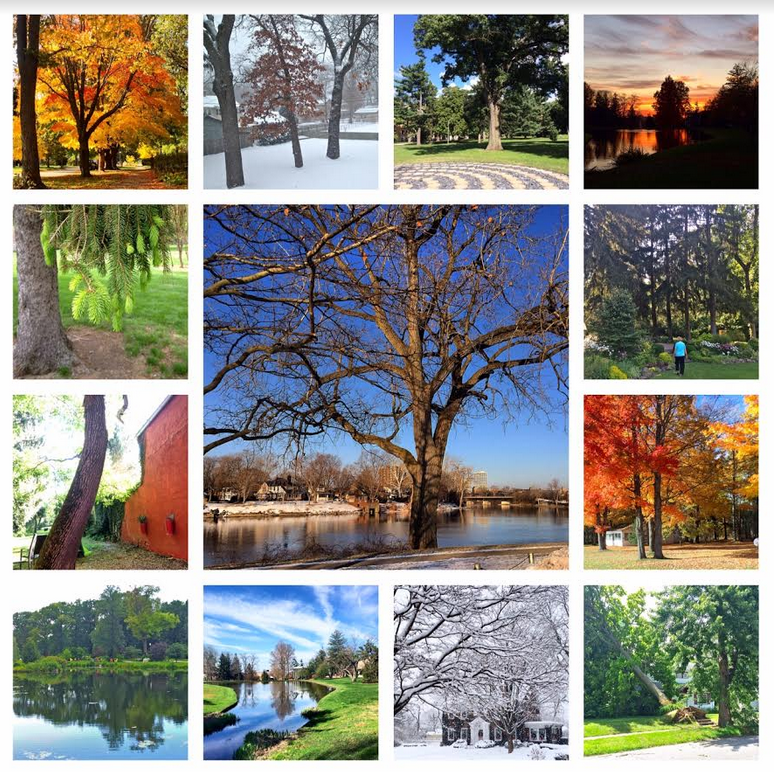 Trees of many sizes and varieties in all seasons

Yesterday Nancy took her turn to share during Kern Road’s Worshiping God through Creation formation hour.  Speaking about “Learning to love the urban forest” since moving with her husband from their wooded lot in rural Michigan to South Bend, she drew for us a portrait of her growing up years on a farm with parents who cared about trees.

The farm, she said, was not a wooded property, but her parents planted trees.  She and each of her brothers all had their own special tree; hers was a weeping willow with a place to hide inside—her own sanctuary.

In her ‘Sister Tree’ blog post from January 12, 2012, Nancy says this about her first encounter with a specific tree after noticing a grove of trees ‘calling’ to her on the five-acre Michigan property: “In  particular, there was a circle of trees that stood next to the path on the downslope farthest from the house. One of the trees was dead, several were maples, and two others were common American hackberrys. One day as I was walking the path this circle seemed to invite me in, and so I stepped into it. As soon as I did that, one of the hackberrys showed itself to be the ‘leader’ of the circle. I stepped over to it, placed my hands on it, and felt a strong surge of peace and happiness that went directly to my gut.”

Nancy continued her practice of visiting the tree: “When I was feeling down, distracted, distressed, I would visit Sister Tree and feel better,” she said on Sunday, describing the tree in a blog post “as a prayer companion, a meditation preparer, an energy field that somehow connects with me.”

Upon visiting Sister Tree for the first time after starting the practice of centering prayer (see her description of this spiritual discipline here), Nancy noticed something different on her first visit to the tree in several months.  Writing in a December 3, 2012, post called ‘Centering Prayer Meets Tree,’ she explained that “what happened that afternoon at the tree was too powerful to ignore. The sense of peace was so strong that it vibrated in my core. The interval between distracting thoughts was so long it was as if the thought-manufacturing part of my mind did not exist. My earlier irritation not only dropped away; it receded so far that it seemed as if I would never feel that way again. After 20 minutes I walked back to the house elated and refreshed.”

Explaining that much research has been done on how spending time in forests, particularly old forests, enhances well being, Nancy referenced Peter Wohlleben’s book, The Hidden Life of Trees, as one parents and grandparents should read to their grandchildren.

Publishers’ Weekly nonfiction review promises that “this fascinating book will intrigue readers who love a walk through the woods. Wohlleben, who worked for the German forestry commission for 20 years and now manages a beech forest in Germany, has gathered research from scientists around the world examining how trees communicate and interact with one another. They do so using a variety of methods, including the secretion of scents and sound vibrations to warn neighboring plants of potential attacks by insects and hungry herbivores, drought, and other dangers.”

According to this HuffPost blog, “The message at the core of the book is that each tree is not an individual, standing alone against the ravages of nature. In fact, the forest functions better as a community. Older trees look after young ones, groups of trees will try to rejuvenate stumps, and predators are repelled by the release of toxins and electrical signals to other trees through the forest network of fungi that they are near.”

A Quartz article published in the fall of 2016 says that “the tonic of the wilderness was Henry David Thoreau’s classic prescription for civilization and its discontents, offered in the 1854 essay Walden: Or, Life in the Woods. Now there’s scientific evidence supporting eco-therapy. The Japanese practice of forest bathing is proven to lower heart rate and blood pressure, reduce stress hormone production, boost the immune system, and improve overall feelings of wellbeing.”

This excerpt from LiveMint offers more information from this intriguing book, and you’ll find a Public Radio International interview with the author here.

When I think back on my own life with trees, I remember sitting frequently on the grass in the back yard as a child close to a medium-sized, young oak, feeling connected to the Earth with the sun beating down on my then-black hair.

Now, many years later, our retirement home came six years ago with a circle of four ancient backyard oaks, perhaps up to 150-200 years old, according to a landscaper friend’s estimate.  I imagine the trees may have once served as sacred space to Native Americans, a sacredness that still permeates the place with a sense of peace and tranquility.

“The more we know about these other aspects of nature, the more we experience our own place in nature” as part of creation, Nancy reminded us.  Take the opportunity this week to connect with trees and other aspects of the Divine’s handiwork.  If you are interested to learn more about Nancy's adventures in her new urban forest, check out this link to her post entitled 'Tending the Urban Forest.'