For the beauty of the Earth 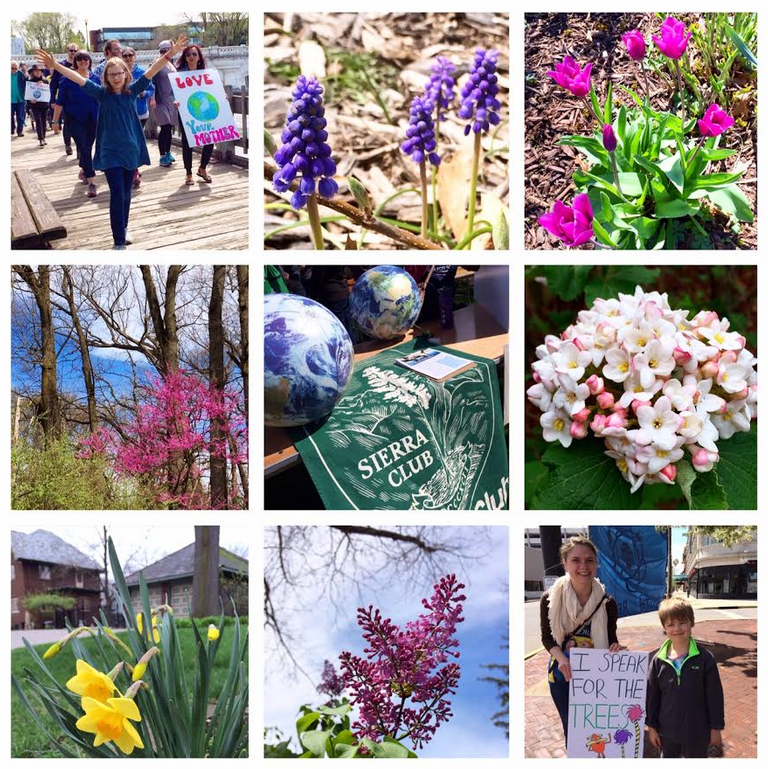 Our wonderful Earth; how do we keep it safe from harm?

Earth Day (this past Saturday) and the last few days here in South Bend couldn’t have been more beautiful…vivid blue skies and off-and-on-again warmth coaxed out bright green leaves and glorious blossoms like redbud and dogwood.  Jenny Wrens sang lustily as fragrance exploded from backyard viburnum and lilac bushes.

Local planners reportedly expected 300-400 marchers in Saturday’s March for Science: South Bend, which coincided with Earth Day, and were pleasantly surprised by a turnout estimated at 1,100, according to an on-line article in the South Bend Tribune.

“The March for Science began as a notion batted around online on Reddit after the Women’s March on Washington, which was held January 21, the day after the inauguration. The idea snowballed after it was endorsed by numerous mainstream science organizations, which vowed that it would not be a partisan event. It eventually became a global phenomenon, held in more than 600 cities on six continents—and cheered on by scientists on a seventh, Antarctica,” a story published Saturday by The Washington Post reveals.

Earth Day Network reports that back on the first Earth Day “on April 22, 1970, 20 million Americans took to the streets, parks, and auditoriums to demonstrate for a healthy, sustainable environment in massive coast-to-coast rallies,” noting that “in the spirit of the teach-ins brought on by the original Earth Day, we are here again to promote awareness of the urgent and unprecedented need to show up for our environment so we can live healthy and sustainable lives.”

According to its website, the Sierra Club, founded by conservationist John Muir in 1892, is “the nation’s largest and most influential grassroots environmental organization, with more than two million members and supporters. Our successes range from protecting millions of acres of wilderness to helping pass the Clean Air Act, Clean Water Act, and Endangered Species Act. More recently, we’ve made history by leading the charge to move away from the dirty fossil fuels that cause climate disruption and toward a clean energy economy.”

The Sierra Club works to “mobilize voters to pressure Congress and other policymakers to protect endangered species, defend national parks and wildlife refuges from dangerous drilling, stop the Keystone XL pipeline, prevent reckless new offshore drilling in the Arctic, Atlantic, Gulf and Pacific, and save the Environmental Protection Agency from an onslaught of attacks that threaten our health and our planet.”

A local South Bend Sierra Club chapter, which had been largely inactive in recent years, has revitalized since January in the wake of present administration activity. These articles reveal some of the broader reasons why people participated in the March for Science on Earth Day: famine and deforestation. Nature Conservancy president and CEO Mark Tercek shares here why that organization supports “science-based work managing and protecting our parks, wildlife refuges, sea shores, fisheries, forests, air and water quality.” For more Earth Day history, read last year’s Glimpses of Healing and Hope blog post here.

Brad Roth, pastor of West Zion Mennonite Church in Moundridge, KS, said in a Mennonite World Review article this past week that “Earth Day is a great time for Christians to show our love for God’s green Earth.” Suggesting that “love for the soil may be the most biblical way to approach love for the Earth,” Roth says, “God placed Adam and Eve in the garden to ‘tend and care’ (Gen. 2:15) for the adamah—‘soil’ or ‘earth’ (3:23). Humanity’s care for Eden was first and foremost care for the soil.”

He continues, “Undoubtedly, God’s charge to tend and care for the soil had to do with its fragility. Soil is a resource that only slowly renews through the action of fungi and bacteria, insects, and earthworms. But more than the soil’s fragility, it’s perhaps the soil’s capacity to bring forth new life that causes God to confer on humankind a special charge to tend and care for it.” Roth concludes that some of the best ways for people of faith to take care of the soil are planting a garden, making compost, and encouraging earthworms.

Mennonite Central Committee reports seven ways it cares for God’s creation (solar power, selling thrift, recycling, energy efficiency, geothermal promotion, and advocacy work) in this article; Mennonite Creation Care Network leader Jennifer Halteman Shrock offers insights here into how congregations might get started with creation care based on individuals’ interests and perspectives.  She describes “simple living servants, foodies, gardeners, and building geeks” as householders, the doers or ‘hands and feet,’ while she names the “naturalists, wounded witnesses, and watershed disciples” as regionally rooted or ‘heart’ people. Finally she categorizes the “theologians, activists, and professionals” in the congregation as the big picture people whom she designates the ‘eyes of the body.’ The challenge for individual congregations becomes sorting out individual gifts and coming to understand how those gifts and interests might merge to facilitate Earth care.

National Public Radio’s Chew on this for Earth Day offers ways to consider how what we eat takes a toll on the Earth.  The story challenges readers/listeners to waste not, want not; rethink eating beef and lamb; consider plant-based dishes in restaurants.

Spirituality & Practice offers these 12 Spiritual Practices to Honor the Earth. “Spiritual practices are the best ways we know to demonstrate kindness and courtesy toward the Earth, to express our gratitude and wonder, to yield to the mystery and the beauty of it all,” the authors say.  Will you practice attention to nature, devotion to the Earth, joy in the plant and animal kingdom, openness to your environment, or perhaps recommit yourself to living “lightly and respectfully on the planet” during this season of resurrection?