Letting our voices be heard 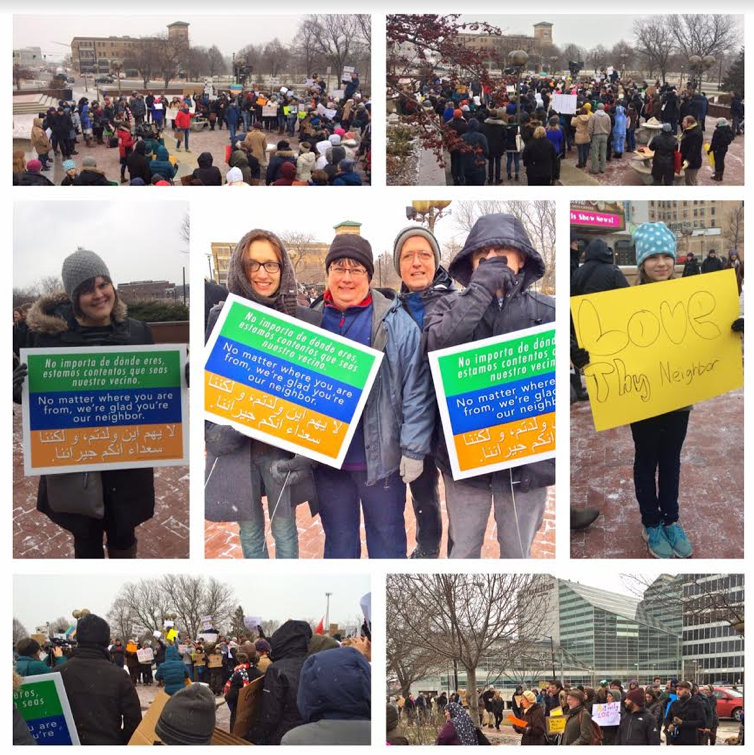 It was cold and snowy, but that didn’t deter at least 11 KRMCers (and possibly more) from making time to participate in the last-minute “No Ban No Wall” rally Sunday afternoon in front of the Morris Performing Arts Center in downtown South Bend.  With prompts to attend from Janna on the congregation’s Facebook page and our faithful daughter, we made it out the door on the heels of our return from a small group gathering.  Armed with our "We're Glad You're Our Neighbors" sign, we trotted briskly around the Morris block, spotting family and friends and a diverse group of others speaking their collective mind about the “No Ban No Wall” agenda.

Only a week has passed since five KRMC women attended the Women's March on Washington, which was good preparation for local events yesterday and more to come, we presume, but so much already has changed in just a week since the presidential transition that it’s somewhat difficult to recall back to the euphoria we experienced immediately after the march.

Prior to the event, Janna reported that “I am going in order to facilitate a formational experience for my daughters. I want them to understand themselves as Anabaptist Christian women worthy of respect and capable of caring for others.  Janna and Amara, eight, and Addie, six, picked up Janna’s mother in Ohio, and connected with her sister, aunts, and cousins in DC.

“As a part of our being there, we also were in active dialogue with other members of the family as to why we participated and how we engaged with the variety of positions represented at the march, which was an extraordinary demonstration of what it means to say no to hate in creative, celebratory, positive ways,” Janna noted.

Becky, who went with her two sisters, said she “came away from the weekend inspired to go beyond a mere involvement in a march to actually carry on the spirit of the march by taking whatever constructive action I can.  Already today (Monday a week ago), I've called Sen. Todd Young's office to register my opposition to Betsy DeVos as secretary of education.  Same call goes to Joe Donnelly tomorrow.  On Wednesday, I'll be calling Rep. Jackie Walorski asking her to save Obamacare, or at any rate, not to end it before something similar is in place.

“I was exhilarated to see rest stops in Ohio filled with women, many wearing pussy hats,” Becky continued.  “I wear my pussy hat proudly and call it by that name.  I knitted seven of them, including ones worn by my daughter and two granddaughters who marched in St. Louis.  We had the same experience coming back through Ohio.  Women honked and waved at sight of our hats or perhaps were tipped off by the Obama/Biden sticker on my minivan,” Becky observed.

Danile explained that she is “pleased that the definition of the word 'pussy' has been successfully transformed by a sea of cat-eared, hand-knitted pink hats.”   She said she thoroughly enjoyed the weekend and indicated that she “was excited by those who showed up to express their resistance to a leader who is seemingly incapable of introspection, self criticism, curiosity, and compassion.  I enjoyed being with my traveling companions and hosts, and in the capital city for a weekend.  I was lifted by the generosity of spirit of the (hundreds of) thousands at the march and the many we met on the way there and back.  I loved the creativity of so many signs, their wit and incisiveness, and hope. I am energized to work against discrimination, exploitation, and greed.  I plan to collaborate with the many local movements to prevent the erosion of good things accomplished in our country, state, and community.”

Brenda, too, shared that she “was energized by the solidarity of concern about this administration regardless of specific agenda and excited by the warm positive effect of so many passionate people; however, I was also met with backlash on social media and from a few coworkers about my decision to attend. I came away with hope that a large swath of people of all stripes with varying agendas have awakened from apathy to believe it is essential that we speak up. I truly feel motivated to more active political involvement in a way I have not before. That is my responsibility.”

Prone to anxiety about elevators, subways, and crowds, I could have succumbed to my fears and stayed away from the march; in fact, when pastor Janice reached out to Janna, Danile, Becky, Brenda, and me because she knew we were all traveling to DC, I answered:  “Thanks for sharing with the congregation, Janice, and for the prayers of the people.  I find myself a bit anxious about the travel, the crowds, the potential risks, bathroom options, etc., so will greatly appreciate you all remembering us…”

Much to my astonishment, the good vibes of the marchers and the prayers of the people made manageable the anxieties I had feared battling on this daunting excursion.  My desire to witness the Washington gathering as a self-care mechanism, to fulfill a need to experience solidarity with folks who still care about the earth and all its inhabitants as we stand at the threshold of a strange new world that threatens not to take care of the least of these, apparently overtook the fear.  I would like to be wrong about the changes I fear in Washington, but, in the meantime, I found it necessary to walk in solidarity with the marginalized on every front.

Most of the KRMC women who participated in the DC march reported dissonance with some of the signs and speaker sentiments expressed there, but, as Brenda said for all of us, “I do not feel responsible for the varying views and level of respect vs. anger expressed at the march; I believe participating was a positive, if imperfect, journey.”

After filing her post-march report, Brenda offered this inspirational addendum about attending a meeting with co-workers:  “A member of the group started the meeting by asking me to share about my experiences in DC. I was totally unprepared to do that, recognizing that people were present who had radically different political views than I. What I ended up saying spontaneously was much more conciliatory, reaching across the divide, than I would have expected to come out of my mouth a week earlier. I explained why I embraced the pink pussy hats, though reluctantly at first, but also acknowledged why they could be seen as offensive. I shared my belief that many people were present, young people in particular, who had never been politically engaged before, and, regardless of which way they might choose to vote, they will now see the importance of being empowered.

“It felt really important to me, transformational, that this amazing experience not be seen as offensive or hateful to people who might view it differently,” Brenda concluded.

Becky's comment that “I hope there's room for the angry among us to sit at the table with those who advocate a quiet approach,” resonates with me.  I, too, hope we can listen well to each other as a new political climate continues to unfold before us.  I trust our congregation will find ways to resist authentically new government mandates that are not in keeping with our understanding of the Gospel.