Defending the most marginalized... 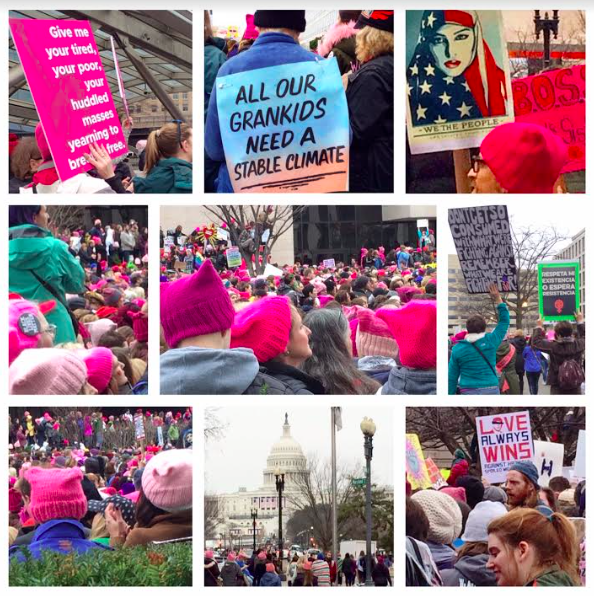 I was hopeful I would have stories to tell you about Mennonites singing at the Women’s March on Washington, but, truth be told, my sister-in-law and I, who traveled together by train from Philadelphia to DC Friday afternoon and arrived home Sunday evening, never saw another Mennonite as far as we know!

The Associated Press estimated a crowd of approximately 500,000 and “a Metro official said that more than a million rail trips were taken Saturday, the second-highest day in its history after Barack Obama’s first inauguration in 2009,” according to The New York Times, so it’s not surprising that we ran across no familiar faces, including the other women from Kern Road, whom I expect will log reports on their experiences for next week’s post.

The two of us will not soon forget the massive, jostling, but very orderly crowds, Saturday’s overcrowded Metro, our restroom run back to the hotel (because the mobs obscured any view of the temporary facilities), the fact that we could find no place but our hotel to eat after the march.

We will not soon forget the silver-haired Japanese woman we talked to as we left Union Station Sunday afternoon.  She told us that, at her age, she did not expect to be marching again for the rights of the marginalized, something she’s been doing since the 60s.  The Japanese are not prone to confrontation, she told us, but they have marched for two causes over the years: this one and against nuclear war.

We will not soon forget the women, men, and children who gathered from all across the country, who spent time and money to assemble peacefully on behalf of “justice and equity for all.”  They marched for many reasons as illustrated by the array of signs they carried:  to stop white silence, to manage global warming, to unite against hate, to promise we will never go back, to announce love always wins, to declare themselves proud to be Muslims, to assert that our grandkids need a stable climate, to affirm that Black lives matter, to proclaim that our daughters are still watching, to acknowledge that we’re glad you’re our neighbor, to suggest we make diversity great again, to remind us that when others go low we go high.

We will not soon forget the compassionate marchers who assisted us as we climbed through a thick hedge when we needed to escape the masses, the immediate attention others gave the woman who dropped to the ground as we were passing, the accommodation offered those walking the opposite direction of the majority, the easy conversations we struck up with sister/brother participants in restaurants and on the Metro.  For whatever reason any of us chose to participate, it seemed we felt a solidarity with this enormous throng of fellow Americans.

March co-founders Breanna Butler and Evvie Harmon called the response overwhelming, pointing out that the movement has become global as nearly 200 cities were signed on to participate in Saturday’s march.  Here’s how the founders envisioned the march’s impact:  “In the spirit of democracy and honoring the champions of human rights, dignity, and justice who have come before us, we join in diversity to show our presence in numbers too great to ignore. The Women’s March on Washington will send a bold message to our new administration on their first day in office, and to the world that women's rights are human rights. We stand together, recognizing that defending the most marginalized among us is defending all of us.

“We support the advocacy and resistance movements that reflect our multiple and intersecting identities. We call on all defenders of human rights to join us. This march is the first step towards unifying our communities, grounded in new relationships, to create change from the grassroots level up. We will not rest until women have parity and equity at all levels of leadership in society. We work peacefully while recognizing there is no true peace without justice and equity for all.”

As people of faith, how do we respond to these needs and concerns, Sojourners asks?  “We respond the way Jesus did.”  Check out this link for recommendations about not sitting out this one.  The Mennonite published this opinion piece about why the author planned to participate in Saturday's event:  “The Women’s March on Washington is a reclamation of voice. This unification of women is about creating solidarity: showing up and speaking up. We are marching because we have endured in silence for too long. We are marching because we cannot be complacent, instead, we must displace ourselves from comfort. We are marching because in the coming years, we must be the church: we must be present in suffering, we must be raw in our grief, and we must actively seek the upside-down kingdom,” says Hanna Heishman.

How will we at Kern Road “be present in suffering, raw in our grief, and actively seeking the upside-down kingdom?”  Now is the time to begin to prepare for these undertakings.  I look forward to sharing next week KRMC women’s responses to their march experiences.

For a more comprehensive picture of women’s marches here at home and around the world, see this series of photos. 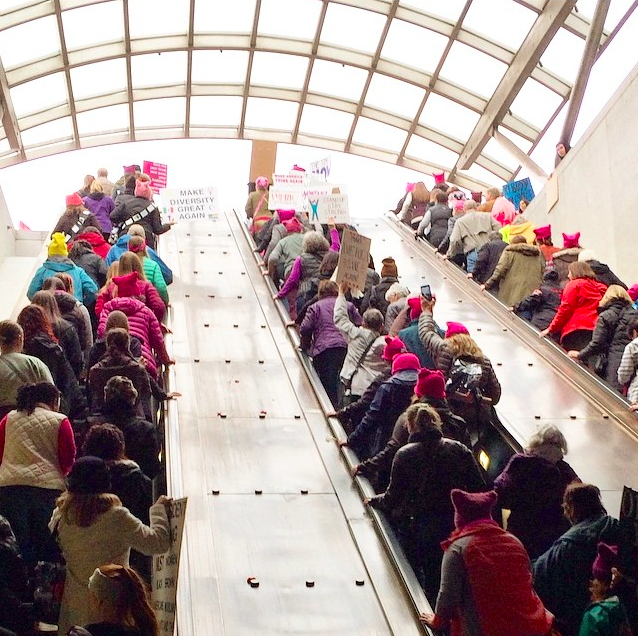