Living into the Resurrection 3

When spring fails to deliver 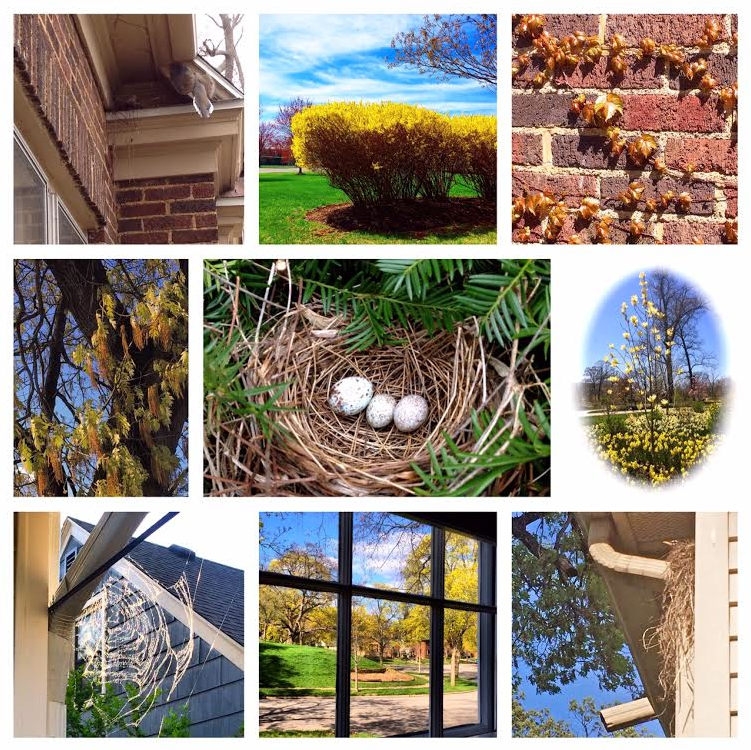 Spring is the season of resurrection, but some signs of spring in the world around us culminate in disastrous outcomes that fail to reveal what we expect of Easter.

The last two years brought three failed birds’ nests to our yard.  In 2014 a pair of mourning doves built a nest in our front eaves, but the nest slid off its perch and we found it on the ground one morning.

Soon after that failure, cardinals constructed a nest in a low shrub outside the sunroom window where we could observe undetected, but one morning we discovered the eggs missing from the nest.  Alerted to the fact that one of the eggs did not match the rest, I learned that cowbirds steal space for their eggs in other species’ nests.

Our cardinal family had, indeed, been victimized by a cowbird.  We were advised to remove the cowbird egg from the nest.  One internet source I read indicated that “cowbirds may ‘punish’ egg-rejectors by destroying the eggs or entire nest.”  Did our intrusion lead to the eventual nest failure?

With our grim 2014 history, I was elated last spring to discover that a robin had built a sloppy nest in a small niche created by our backyard guttering at the second-story level. By the time I noticed the nest, the mother bird was already sitting on it, and, though I had missed the building frenzy, I felt hopeful that this nest might survive long enough to produce young robins.

Only two days into nest-watching, however, I was disappointed yet again one morning to find this third nest on the ground with no sign of eggs anywhere.  Perhaps they were yet to be laid or maybe a raccoon got to them, a friend suggested.

Trying to understand our 100% failure rate, I began scouring the internet and was surprised to discover that robins “can produce up to three successful broods in one year. On average, two clutches are raised with less than half being successful. Only a quarter of those that do fledge survive to November. From that point on, about half of the birds alive in any year will make it to the next.”

Typically the season bounces back and forth between winter and summer with at least a few casualties as chilly temperatures and late snow showers snuff out magnolia blossoms or fruit tree buds perhaps forced out prematurely by too-warm-too-soon temps.  Last year I found our tender new greenery chomped to the ground or stomped to bits overnight by hungry intruders.

Caught in the midst of these kinds of seasonal “failures” and losses or severe weather in our own lives, how do we respond when resurrection seems momentarily to slip out of sight?  What learnings might take place even in the midst of disappointment?

Even as failed nests, frozen blooms, and nibbled stems and leaves are unhappy experiences for some of us, I found it interesting to learn recently that the advent of a mourning dove in one’s life “signals a time to go within, a time to release emotional discord and the memories of past trauma.”  I was intrigued to receive the appearance of these mourning doves as signs of resurrection, because, as one author I read pointed out, though its melancholy call has earned this bird its name, “beyond its sorrowful song is a message of life, hope, renewal, and peace.”

Along with the disappointments of spring, we savor earlier sunrises and longer evenings, the reappearance of morning birdsong, the variety of growing things that come to life in our yards and flower beds, the successful nest-building, and the many creatures that reappear from their winter hiding places.

Parker Palmer’s Spring is Mud and Miracle speaks eloquently about the many resurrections born of spring.  What Palmer observes is so true:  “Spring begins tentatively, but it advances with a tenacity that never fails to touch me. The smallest and most tender shoots insist on having their way, pressing up through ground that looked, only a few weeks earlier, as if it would never grow anything again. The crocuses and snowdrops don’t bloom for long. But their mere appearance, however brief, is always a harbinger of hope—and from those small beginnings, hope grows at a geometric rate. The days get longer, the winds get warmer, and the world grows green again.”

Parker goes on to say, “From autumn’s profligate seeding to the great spring give-away, nature teaches a steady lesson. If we want to save our lives, we must spend them with abandon. When we’re obsessed with bottom lines and productivity, with efficiency of time and motion, with the rational relation of means and ends, with projecting reasonable goals and making a beeline toward them, it’s unlikely we will ever know the fullness of spring in our own lives.”

What will the fullness of living into Easter look like in each of our lives this resurrection season?  In the words of Jan Richardson, what are we being asked “to carry from the Easter garden to proclaim in the world, in the way that only we can proclaim it and live it out?”  Where will the Easter path take us?

Author Macrina Wiederkehr suggests we ponder questions like these as we await, and ultimately experience, the arrival of spring in nature and in our own lives:  “How are we, like the buds of the earth, opening to God and to others?  What secrets buried deep in the soil of our souls are being revealed to us?  How is the gospel of springtime unfolding for us?  What is the great blossoming in us?”

Wiederkehr notes that, as the vibrancy of life is about to pulse through nature at this time of year, it is also a good thing to “enjoy what is emerging from within, to savor the taste of hope, to trust in what the future promises.  It is the time to believe in growth and to give oneself to it wholeheartedly.”